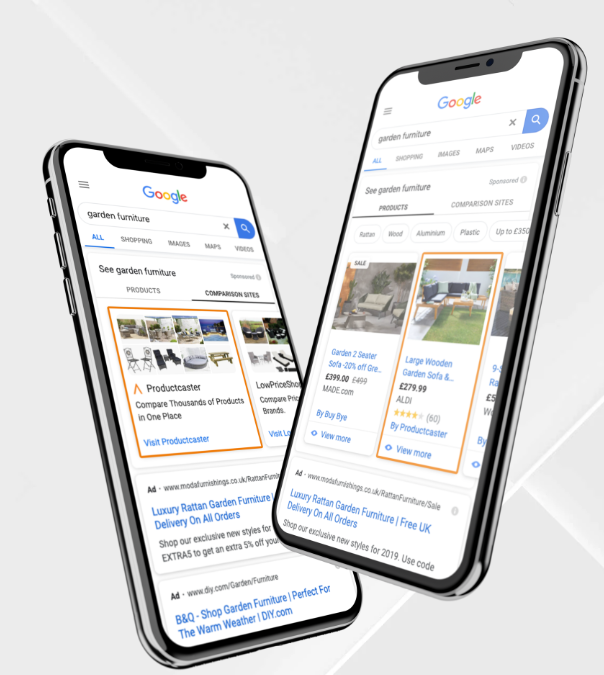 It’s been around two years since Google received a record €2.4bn fine in 2017 for favouring its own shopping comparison service over its competitors. Just over a year after the fine, the multinational technology giant opened up the playing field for more Comparison Shopping Services (CSS).

The principal behind the incentive was to shake up the Google Shopping market and make it more competitive once again. To ensure retailers jumped on board with the new CSS solution, Google ran a discounted auction of up to 20% off CPCs, in return for the same traffic as before. Google also gave retailers 30% ad credit to retailers until October 31st 2018 (5% from Nov 1st – Dec 31st), during which Productcaster generated clients over £3m in ad credit through the ad credit incentive.

Traditional CSSs, and agencies were encouraged to get on board and create their own CSS to increase the number of providers in prime shopping positions. Many were able to hit the ground running with technology, teams and a quick turn around on a time-sensitive incentive. As a trusted Google partner for over 18 years, Summit created Productcaster, a product feed publishing engine, publishing feeds at a reduced cost to the multi-category comparison site, css.productcaster.com

As the UK’s first recognised CSS Premium Partner, Productcaster has grown to be recognised as Europe’s largest CSS platform, having over 200 retailers with over 500 individual merchant accounts in over 22 countries. But was it always smooth sailing?

The challenges for CSS

As the market filled with CSSs, Google noticed some disregard for the quality of the comparison websites and their set-up and even introduced new regulations in December 2018 to be introduced in the new year. Although only a small percentage of customers click on the CSS button, e.g. By Productcaster, Google enforced the rules to ensure customer experience when visiting the sites reflected a high level of service in the same way they would through their own comparison site.

As part of the new regulations, Google also introduced a criterion of a minimum of 50 retailers per territory in order for CSS partners to advertise in those locations. For many agencies who had adopted CSS as an opportunity, they were unable to dedicate enough time and resource to keep up with Google’s regulations, and as a result, CSSs declined from 136 to 48 in February 2019 when the regulations began being enforced.

The future of CSS

Despite Google’s ad credit coming to an end in December, and a significant drop in CSSs, many retailers and agencies are still taking advantage of the 20% CPC benefits.

Productcaster continues to successfully onboard new CSS clients and helps retailers and agencies understand the performance benefits available to them. With over 200 feed checks completed for our retailer partners, Productcaster can also offer guidance on how to enhance the performance of your feed driven marketing. To find out more about CSS or how to best optimise your feed contact  info@productcaster.com or call +44 (0)20 3948 4696